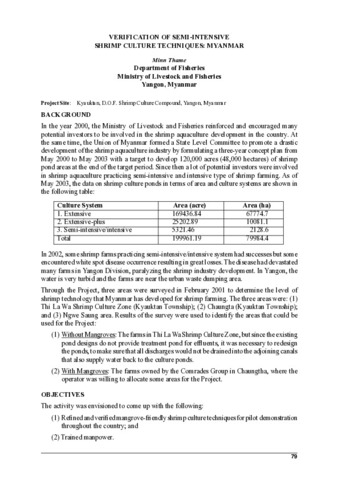 In the year 2000, the Ministry of Livestock and Fisheries reinforced and encouraged many potential investors to be involved in the shrimp aquaculture development in the country. At the same time, the Union of Myanmar formed a State Level Committee to promote a drastic development of the shrimp aquaculture industry by formulating a three-year concept plan from May 2000 to May 2003 with a target to develop 120,000 acres (48,000 hectares) of shrimp pond areas at the end of the target period. Since then a lot of potential investors were involved in shrimp aquaculture practicing semi-intensive and intensive type of shrimp farming. In 2002, some shrimp farms practicing semi-intensive/intensive system had successes but some encountered white spot disease occurrence resulting in great losses. The disease had devastated many farms in Yangon Division, paralyzing the shrimp industry development. In Yangon, the water is very turbid and the farms are near the urban waste dumping area. Through the Project, three areas were surveyed in February 2001 to determine the level of shrimp technology that Myanmar has developed for shrimp farming. The three areas were: (1) Thi La Wa Shrimp Culture Zone (Kyauktan Township); (2) Chaungta (Kyauktan Township); and (3) Ngwe Saung area. Results of the survey were used to identify the areas that could be used for the Project.