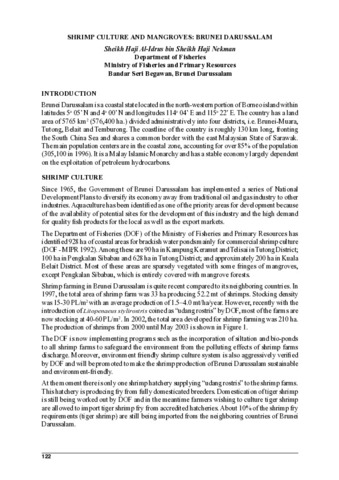 Brunei Darussalam is a coastal state located in the north-western portion of Borneo island within latitudes 5o 05’ N and 4o 00’ N and longitudes 114o 04’ E and 115o 22’ E. The country has a land area of 5765 km2 (576,400 ha.) divided administratively into four districts, i.e. Brunei-Muara, Tutong, Belait and Temburong. The coastline of the country is roughly 130 km long, fronting the South China Sea and shares a common border with the east Malaysian State of Sarawak. The main population centers are in the coastal zone, accounting for over 85% of the population (305,100 in 1996). It is a Malay Islamic Monarchy and has a stable economy largely dependent on the exploitation of petroleum hydrocarbons.