Mitigation plan on the use of mangroves for aquaculture: Thailand. 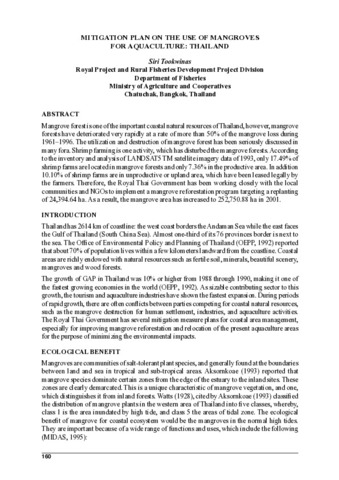 Mangrove forest is one of the important coastal natural resources of Thailand, however, mangrove forests have deteriorated very rapidly at a rate of more than 50% of the mangrove loss during 1961–1996. The utilization and destruction of mangrove forest has been seriously discussed in many fora. Shrimp farming is one activity, which has disturbed the mangrove forests. According to the inventory and analysis of LANDSAT5 TM satellite imagery data of 1993, only 17.49% of shrimp farms are located in mangrove forests and only 7.36% in the productive area. In addition 10.10% of shrimp farms are in unproductive or upland area, which have been leased legally by the farmers. Therefore, the Royal Thai Government has been working closely with the local communities and NGOs to implement a mangrove reforestation program targeting a replanting of 24,394.64 ha. As a result, the mangrove area has increased to 252,750.88 ha in 2001.