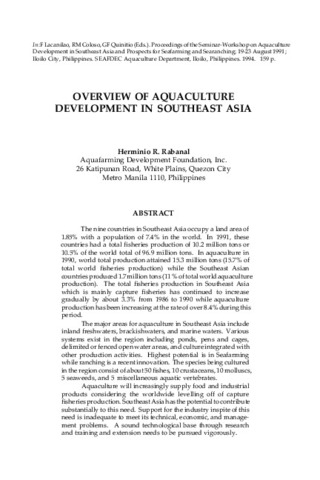 The nine countries in Southeast Asia occupy a land area of 1.85% with a population of 7.4% in the world. In 1991, these countries had a total fisheries production of 10.2 million tons or 10.5% of the world total of 96.9 million tons. In aquaculture in 1990, world total production attained 15.3 million tons (15.7% of total world fisheries production) while the Southeast Asian countries produced 1.7 million tons (11 % of total world aquaculture production). The total fisheries production in Southeast Asia which is mainly capture fisheries has continued to increase gradually by about 3.3% from 1986 to 1990 while aquaculture production has been increasing at the rate of over 8.4% during this period.The major areas for aquaculture in Southeast Asia include inland freshwaters, brackishwaters, and marine waters. Various systems exist in the region including ponds, pens and cages, delimited or fenced open water areas, and culture integrated with other production activities. Highest potential is in Seafarming while ranching is a recent innovation. The species being cultured in the region consist of about 50 fishes, 10 crustaceans, 10 molluscs, 5 seaweeds, and 5 miscellaneous aquatic vertebrates.Aquaculture will increasingly supply food and industrial products considering the worldwide levelling off of capture fisheries production. Southeast Asia has the potential to contribute substantially to this need. Support for the industry inspite of this need is inadequate to meet its technical, economic, and management problems. A sound technological base through research and training and extension needs to be pursued vigorously.