Overview of seafarming and searanching technology in Japan 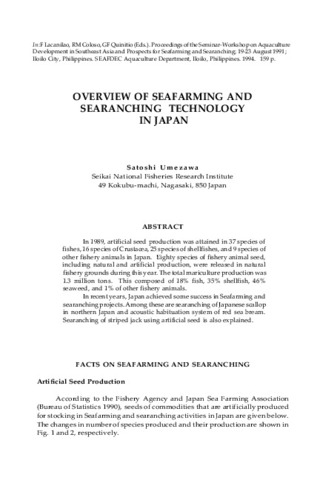 In 1989, artificial seed production was attained in 37 species of fishes, 16 species of Crustacea, 25 species of shellfishes, and 9 species of other fishery animals in Japan. Eighty species of fishery animal seed, including natural and artificial production, were released in natural fishery grounds during this year. The total mariculture production was 1.3 million tons. This composed of 18% fish, 35% shellfish, 46% seaweed, and 1% of other fishery animals.In recent years, Japan achieved some success in Seafarming and searanching projects. Among these are searanching of Japanese scallop in northern Japan and acoustic habituation system of red sea bream. Searanching of striped jack using artificial seed is also explained.