Seafarming and searanching in Thailand 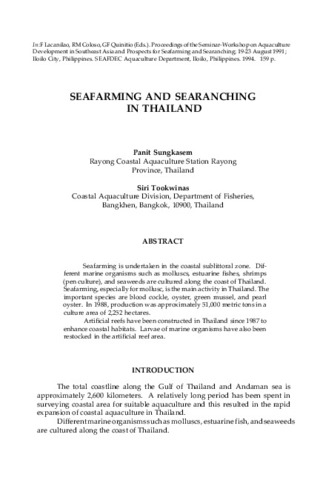 Seafarming is undertaken in the coastal sublittoral zone. Different marine organisms such as molluscs, estuarine fishes, shrimps (pen culture), and seaweeds are cultured along the coast of Thailand. Seafarming, especially for mollusc, is the main activity in Thailand. The important species are blood cockle, oyster, green mussel, and pearl oyster. In 1988, production was approximately 51,000 metric tons in a culture area of 2,252 hectares.Artificial reefs have been constructed in Thailand since 1987 to enhance coastal habitats. Larvae of marine organisms have also been restocked in the artificial reef area.