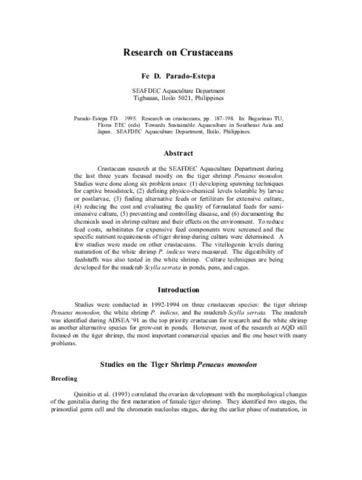 Crustacean research at the SEAFDEC Aquaculture Department during the last three years focused mostly on the tiger shrimp Penaeus monodon. Studies were done along six problem areas: (1) developing spawning techniques for captive broodstock, (2) defining physico-chemical levels tolerable by larvae or postlarvae, (3) finding alternative feeds or fertilizers for extensive culture, (4) reducing the cost and evaluating the quality of formulated feeds for semiintensive culture, (5) preventing and controlling disease, and (6) documenting the chemicals used in shrimp culture and their effects on the environment. To reduce feed costs, substitutes for expensive feed components were screened and the specific nutrient requirements of tiger shrimp during culture were determined. A few studies were made on other crustaceans. The vitellogenin levels during maturation of the white shrimp P. indicus were measured. The digestibility of feedstuffs was also tested in the white shrimp. Culture techniques are being developed for the mudcrab Scylla serrata in ponds, pens, and cages.