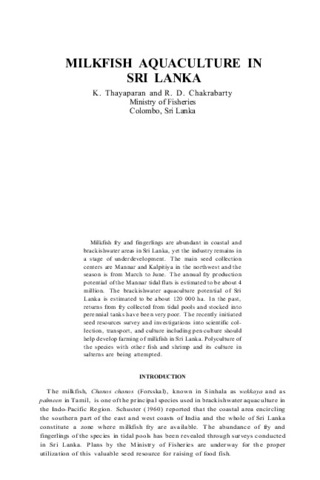 Milkfish (Chanos chanos ) fry and fingerlings are abundant in coastal and brackishwater areas in Sri Lanka, yet the industry remains in a stage of underdevelopment. The main seed collection centers are Mannar and Kalpitiya in the northwest and the season is from March to June. The annual fry production potential of the Mannar tidal flats is estimated to be about 4 million. The brackishwater aquaculture potential of Sri Lanka is estimated to be about 120,000 ha. In the past, returns from fry collected from tidal pools and stocked into perennial tanks have been very poor. The recently initiated seed resources survey and investigations into scientific collection, transport, and culture including pen culture should help develop farming of milkfish in Sri Lanka. Polyculture of the species with other fish and shrimp and its culture in salterns are being attempted.