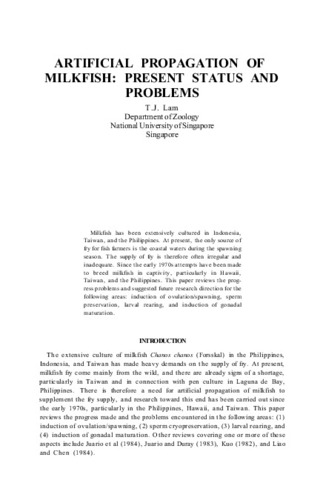 Milkfish (Chanos chanos ) has been extensively cultured in Indonesia, Taiwan, and the Philippines. At present, the only source of fry for fish farmers is the coastal waters during the spawning season. The supply of fry is therefore often irregular and inadequate. Since the early 1970s attempts have been made to breed milkfish in captivity, particularly in Hawaii, Taiwan, and the Philippines. This paper reviews the progress problems and suggested future research direction of the following areas: induction of ovulation/spawning, sperm preservation, larval rearing, and induction of gonadal maturation.