Gonadal development and induced breeding of captive milkfish in Taiwan 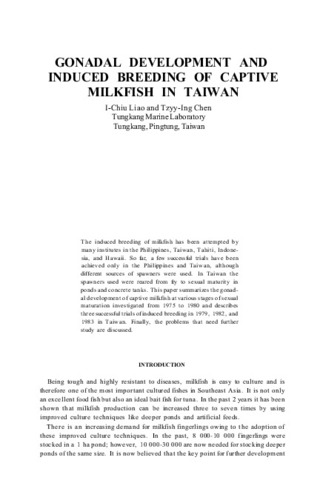 The induced breeding of milkfish (Chanos chanos ) has been attempted by many institutes in the Philippines, Taiwan, Tahiti, Indonesia, and Hawaii. So far, a few successful trials have been achieved only in the Philippines and Taiwan, although different sources of spawners were used. In Taiwan the spawners used were reared from fry to sexual maturity in ponds and concrete tanks. This paper summarizes the gonadal development of captive milkfish at various stages of sexual maturation investigated from 1975 to 1980 and describes three successful trials of induced breeding in 1979, 1982, and 1983 in Taiwan. Finally, the problems that need further study are discussed.