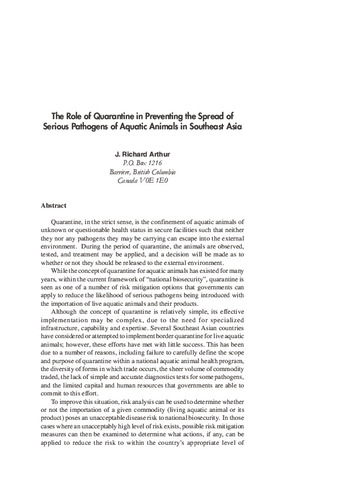 Quarantine, in the strict sense, is the confinement of aquatic animals of unknown or questionable health status in secure facilities such that neither they nor any pathogens they may be carrying can escape into the external environment. During the period of quarantine, the animals are observed, tested, and treatment may be applied, and a decision will be made as to whether or not they should be released to the external environment. While the concept of quarantine for aquatic animals has existed for many years, within the current framework of "national biosecurity", quarantine is seen as one of a number of risk mitigation options that governments can apply to reduce the likelihood of serious pathogens being introduced with the importation of live aquatic animals and their products. Although the concept of quarantine is relatively simple, its effective implementation may be complex, due to the need for specialized infrastructure, capability and expertise. Several Southeast Asian countries have considered or attempted to implement border quarantine for live aquatic animals; however, these efforts have met with little success. This has been due to a number of reasons, including failure to carefully define the scope and purpose of quarantine within a national aquatic animal health program, the diversity of forms in which trade occurs, the sheer volume of commodity traded, the lack of simple and accurate diagnostics tests for some pathogens, and the limited capital and human resources that governments are able to commit to this effort. To improve this situation, risk analysis can be used to determine whether or not the importation of a given commodity (living aquatic animal or its product) poses an unacceptable disease risk to national biosecurity. In those cases where an unacceptably high level of risk exists, possible risk mitigation measures can then be examined to determine what actions, if any, can be applied to reduce the risk to within the country's appropriate level of protection (ALOP). In this way, quarantine, as one of a suite of possible risk reduction measures, can be applied effectively on a case-by-case basis to reduce the risk of introduction, establishment and spread of serious aquatic animal pathogens into new areas.