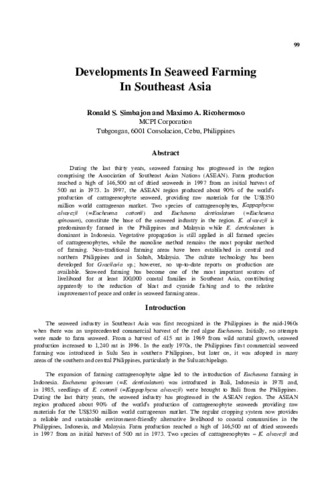 During the last thirty years, seaweed farming has progressed in the region comprising the Association of Southeast Asian Nations (ASEAN). Farm production reached a high of 146,500 mt of dried seaweeds in 1997 from an initial harvest of 500 mt in 1973. In 1997, the ASEAN region produced about 90% of the world s production of carrageenophyte seaweed, providing raw materials for the US$35O million world carrageenan market. Two species of carrageenophytes, Kappaphycus alvarezii (=Eucheuma cottonii) and Eucheuma denticulatum (=Eucheuma spinosum), constitute the base of the seaweed industry in the region. K. alvarezii is predominantly farmed in the Philippines and Malaysia while E. denticulatum is dominant in Indonesia. Vegetative propagation is still applied in all farmed species of carrageenophytes, while the monoline method remains the most popular method of farming. Non-traditional farming areas have been established in central and northern Philippines and in Sabah, Malaysia. The culture technology has been developed for Gracilaria sp.; however, no up-to-date reports on production are available. Seaweed farming has become one of the most important sources of livelihood for at least 100,000 coastal families in Southeast Asia, contributing apparently to the reduction of blast and cyanide fishing and to the relative improvement of peace and order in seaweed farming areas.