Markets and marketing trends for aquaculture products in Southeast Asia 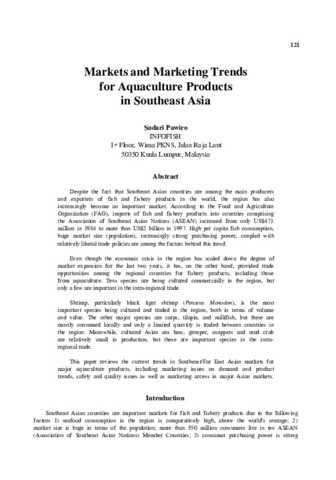 Despite the fact that Southeast Asian countries are among the main producers and exporters of fish and fishery products in the world, the region has also increasingly become an important market. According to the Food and Agriculture Organization (FAO), imports of fish and fishery products into countries comprising the Association of Southeast Asian Nations (ASEAN) increased from only US$471 million in 1984 to more than US$2 billion in 1997. High per capita fish consumption, huge market size (population), increasingly strong purchasing power, coupled with relatively liberal trade policies are among the factors behind this trend. Even though the economic crisis in the region has scaled down the degree of market expansion for the last two years, it has, on the other hand, provided trade opportunities among the regional countries for fishery products, including those from aquaculture. Ten species are being cultured commercialIy in the region, but only a few are important in the intra-regional trade. Shrimp, particularly black tiger shrimp (Penaeus monodon), is the most important species being cultured and traded in the region, both in terms of volume and value. The other major species are carps, tilapia, and milkfish, but these are mostly consumed locally and only a limited quantity is traded between countries in the region. Meanwhile, cultured Asian sea bass, grouper, snappers and mud crab are relatively small in production, but these are important species in the intraregional trade. This paper reviews the current trends in Southeast/Far East Asian markets for major aquaculture products, including marketing issues on demand and product trends, safety and quaIity issues as well as marketing access in major Asian markets.