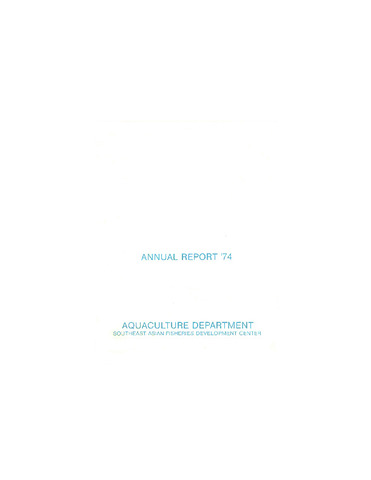 The 1974 report describes the development of project sites at Tigbauan and Leganes, where new ponds and labs have been established. The facilities of these labs include covered and open ponds, wet and field labs, a food preparation building, as well as dormitories and housing units. A substation is now operating at Nueva Valencia, investigating the life cycle of tiger prawn, Penaeus monodon, and 5 further substations also exist. Organisational aspects are described, covering scientific staff, equipment, funding etc. The Department s activities are described in detail; these are mainly concerned with shellfish culture and the associated problems. Notes are included on the First Aquaculture Research Conference (April 1974)and 7th SEAFDEC Council Meeting (Dec 1974). Finally, the new and continuing research projects to be conducted during 1975 are listed.