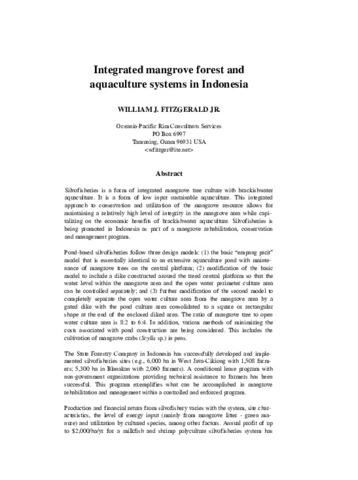 Silvofisheries is a form of integrated mangrove tree culture with brackishwater aquaculture. It is a form of low input sustainable aquaculture. This integrated approach to conservation and utilization of the mangrove resource allows for maintaining a relatively high level of integrity in the mangrove area while capitalizing on the economic benefits of brackishwater aquaculture. Silvofisheries is being promoted in Indonesia as part of a mangrove rehabilitation, conservation and management program. Pond-based silvofisheries follow three design models: (1) the basic “empang parit” model that is essentially identical to an extensive aquaculture pond with maintenance of mangrove trees on the central platform; (2) modification of the basic model to include a dike constructed around the treed central platform so that the water level within the mangrove area and the open water perimeter culture area can be controlled separately; and (3) further modification of the second model to completely separate the open water culture area from the mangrove area by a gated dike with the pond culture area consolidated to a square or rectangular shape at the end of the enclosed diked area. The ratio of mangrove tree to open water culture area is 8:2 to 6:4. In addition, various methods of minimizing the costs associated with pond construction are being considered. This includes the cultivation of mangrove crabs (Scylla sp.) in pens. The State Forestry Company in Indonesia has successfully developed and implemented silvofisheries sites (e.g., 6,000 ha in West Java-Cikiong with 1,508 farmers; 5,300 ha in Blanakan with 2,060 farmers). A conditional lease program with non-government organizations providing technical assistance to farmers has been successful. This program exemplifies what can be accomplished in mangrove rehabilitation and management within a controlled and enforced program. Production and financial return from silvofishery varies with the system, site characteristics, the level of energy input (mainly from mangrove litter - green manure) and utilization by cultured species, among other factors. Annual profit of up to $2,000/ha/yr for a milkfish and shrimp polyculture silvofisheries system has been reported. There is a need to refine data and analysis, since all costs are often not included, and revenue projections are often based on expected production rather than actual production. Farm interviews in West Java showed a range in gross income from $313 to $946/ha/yr while net profit per individual farm (1.5-10 ha farm size) ranged from $943 to $1,558/farm/yr. There was greater production effort per unit area by farmers with smaller farms. Individual silvofishery farmers often combine incomes from multiple sources. The application of silvofisheries practices requires reasonable measures of caution as with any activity in an environmentally sensitive area as the mangroves. Additional important considerations in the development of silvofisheries as part of an activity within the mangrove ecosystem include the issues of land ownership, integrated coastal zone planning and development, comparative economic assessment, systems models, optimizing use of inputs, selection of mangrove tree and aquaculture species, better understanding of trophic production and food web utilization, and improvement of economic return.