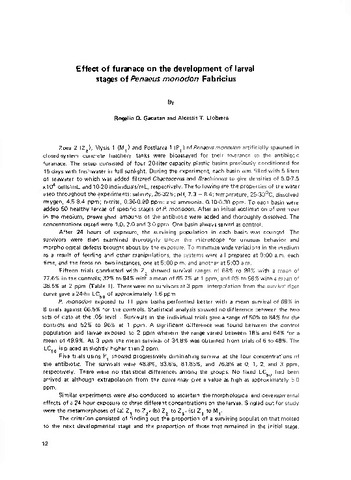 Zoea 2 (Z2), Mysis 1 (M1) and Postlarva 1 (P1) of P. monodon artificially spawned in closed-system concrete hatchery tanks were bioassayed for their tolerance to the antibiotic furanace. The setup consisted of four 20-liter capacity plastic basins previously conditioned for 15 days with freshwater in full sunlight. During the experiment, each basin was filled with 5 liters of seawater to which was added filtered Chaetoceros and Brachionus to give densities of 5 . 0-7 . 5 x 10-4 cells/ml and 10-20 individuals/ml, respectively. The following are the properties of the water used throughout the experiments: salinity, 26-32%; pH, 7 . 3-8 . 4; temperature, 25-30 degree C; dissolved oxygen, 4 . 5-8 . 4 ppm; nitrite, 0 . 36-0 . 99 ppm; and ammonia, 0 . 10-0 . 30 ppm. To each basin were added 50 healthy larvae of specific stages of P. monodon. After an initial acclimation of one hour in the medium, preweighed amounts of the antibiotic were added and thoroughly dissolved. The concentrations tested were 1 . 0, 2 . 0 and 3 . 0 ppm. One basin always served as control. After 24 hours of exposure, the surviving population in each basin was counted. The survivors were then examined thoroughly under the microscope for unusual behavior and morphological defects brought about by the exposure. To minimize wide variations in the medium as a result of feeding and other manipulations, the systems were all prepared at 9:00 a.m. each time, and the feeds on two instances, one at 5:00 p.m. and another at 5:00 a.m. Fifteen trials conducted with Z2 showed survival ranges of 68% to 98% with a mean of 77 . 6% in the controls; 32% to 94% with a mean of 65 . 7% at 1 ppm, and 0% to 56% with a mean of 36.5% at 2 ppm. There were no survivors at 3 ppm. Interpolation from the survival-dose curve gave a 24-hr LC50 of approximately 1.6 ppm.