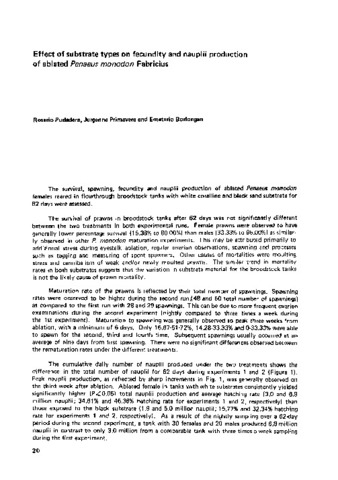 Experiments were undertaken to assess the survival, spawning, fecundity and nauplii production of ablated P. monodon females reared in flow-through broodstock tanks with white coralline and black sand substrate for 62 days. The similar trend observed in mortality rates in both substrates suggests that variation in substrate material for broodstock tanks is not a likely cause of prawn mortality. There were also no significant differences observed between rematurtion rates, i.e. number of spawnings, under the different treatments. Singnificantly higher nauplii production were observed in females in tanks with white substrates. At present, the land-based broodstock tanks in SEAFDEC utilize white coralline substrates due to higher hatching rate of eggs and nauplii production, convenience in siphoning out debris and excess food that tend to accumulte in the tank, and contrast provided by the white substrate during nightly observations of ovaries.