Rapid adaptation to a new environment: is it reversible? 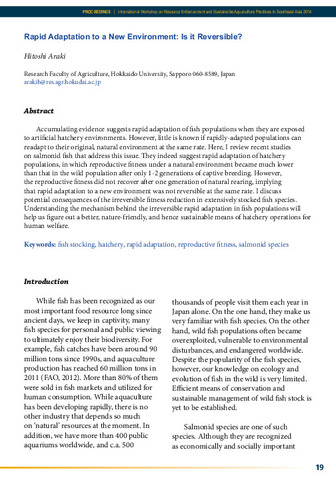 Accumulating evidence suggests rapid adaptation of fish populations when they are exposed to artificial hatchery environments. However, little is known if rapidly-adapted populations can readapt to their original, natural environment at the same rate. Here, I review recent studies on salmonid fish that address this issue. They indeed suggest rapid adaptation of hatchery populations, in which reproductive fitness under a natural environment became much lower than that in the wild population after only 1-2 generations of captive breeding. However, the reproductive fitness did not recover after one generation of natural rearing, implying that rapid adaptation to a new environment was not reversible at the same rate. I discuss potential consequences of the irreversible fitness reduction in extensively stocked fish species. Understanding the mechanism behind the irreversible rapid adaptation in fish populations will help us figure out a better, nature-friendly, and hence sustainable means of hatchery operations for human welfare.