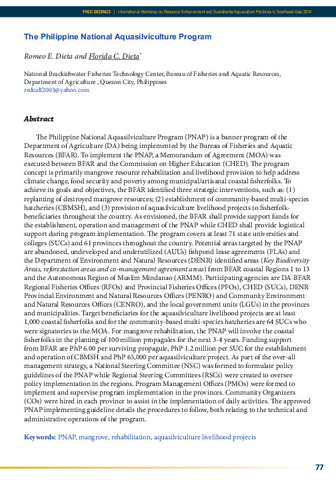 The Philippine National Aquasilviculture Program (PNAP) is a banner program of the Department of Agriculture (DA) being implemented by the Bureau of Fisheries and Aquatic Resources (BFAR). To implement the PNAP, a Memorandum of Agreement (MOA) was executed between BFAR and the Commission on Higher Education (CHED). The program concept is primarily mangrove resource rehabilitation and livelihood provision to help address climate change, food security and poverty among municipal/artisanal coastal fisherfolks. To achieve its goals and objectives, the BFAR identified three strategic interventions, such as: (1) replanting of destroyed mangrove resources; (2) establishment of community-based multi-species hatcheries (CBMSH), and (3) provision of aquasilviculture livelihood projects to fisherfolkbeneficiaries throughout the country. As envisioned, the BFAR shall provide support funds for the establishment, operation and management of the PNAP while CHED shall provide logistical support during program implementation. The program covers at least 71 state universities and colleges (SUCs) and 61 provinces throughout the country. Potential areas targeted by the PNAP are abandoned, undeveloped and underutilized (AUUs) fishpond lease agreements (FLAs) and the Department of Environment and Natural Resources (DENR) identified areas (Key Biodiversity Areas, reforestation areas and co-management agreement areas) from BFAR coastal Regions 1 to 13 and the Autonomous Region of Muslim Mindanao (ARMM). Participating agencies are DA-BFAR Regional Fisheries Offices (RFOs) and Provincial Fisheries Offices (PFOs), CHED (SUCs), DENR Provincial Environment and Natural Resources Offices (PENRO) and Community Environment and Natural Resources Offices (CENRO), and the local government units (LGUs) in the provinces and municipalities. Target beneficiaries for the aquasilviculture livelihood projects are at least 1,000 coastal fisherfolks and for the community-based multi-species hatcheries are 64 SUCs who were signatories to the MOA. For mangrove rehabilitation, the PNAP will involve the coastal fisherfolks in the planting of 100 million propagules for the next 3-4 years. Funding support from BFAR are PhP 6.00 per surviving propagule, PhP 1.2 million per SUC for the establishment and operation of CBMSH and PhP 65,000 per aquasilviculture project. As part of the over-all management strategy, a National Steering Committee (NSC) was formed to formulate policy guidelines of the PNAP while Regional Steering Committees (RSCs) were created to oversee policy implementation in the regions. Program Management Offices (PMOs) were formed to implement and supervise program implementation in the provinces. Community Organizers (COs) were hired in each province to assist in the implementation of daily activities. The approved PNAP implementing guideline details the procedures to follow, both relating to the technical and administrative operations of the program.