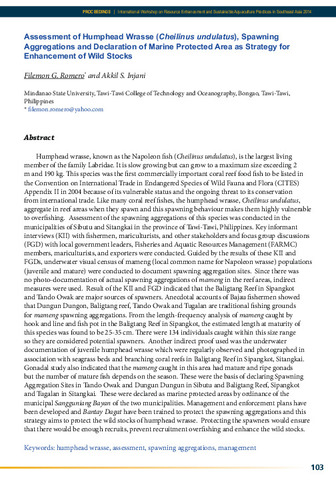 Humphead wrasse, known as the Napoleon fish (Cheilinus undulatus), is the largest living member of the family Labridae. It is slow growing but can grow to a maximum size exceeding 2 m and 190 kg. This species was the first commercially important coral reef food fish to be listed in the Convention on International Trade in Endangered Species of Wild Fauna and Flora (CITES) Appendix II in 2004 because of its vulnerable status and the ongoing threat to its conservation from international trade. Like many coral reef fishes, the humphead wrasse, Cheilinus undulatus, aggregate in reef areas when they spawn and this spawning behaviour makes them highly vulnerable to overfishing. Assessment of the spawning aggregations of this species was conducted in the municipalities of Sibutu and Sitangkai in the province of Tawi-Tawi, Philippines. Key informant interviews (KII) with fishermen, mariculturists, and other stakeholders and focus group discussions (FGD) with local government leaders, Fisheries and Aquatic Resources Management (FARMC) members, mariculturists, and exporters were conducted. Guided by the results of these KII and FGDs, underwater visual census of mameng (local common name for Napoleon wrasse) populations (juvenile and mature) were conducted to document spawning aggregation sites. Since there was no photo-documentation of actual spawning aggregations of mameng in the reef areas, indirect measures were used. Result of the KII and FGD indicated that the Baligtang Reef in Sipangkot and Tando Owak are major sources of spawners. Anecdotal accounts of Bajau fishermen showed that Dungun Dungon, Baligtang reef, Tando Owak and Tugalan are traditional fishing grounds for mameng spawning aggregations. From the length-frequency analysis of mameng caught by hook and line and fish pot in the Baligtang Reef in Sipangkot, the estimated length at maturity of this species was found to be 25-35 cm. There were 134 individuals caught within this size range so they are considered potential spawners. Another indirect proof used was the underwater documentation of juvenile humphead wrasse which were regularly observed and photographed in association with seagrass beds and branching coral reefs in Baligtang Reef in Sipangkot, Sitangkai. Gonadal study also indicated that the mameng caught in this area had mature and ripe gonads but the number of mature fish depends on the season. These were the basis of declaring Spawning Aggregation Sites in Tando Owak and Dungun Dungun in Sibutu and Baligtang Reef, Sipangkot and Tugalan in Sitangkai. These were declared as marine protected areas by ordinance of the municipal Sangguniang Bayan of the two municipalities. Management and enforcement plans have been developed and Bantay Dagat have been trained to protect the spawning aggregations and this strategy aims to protect the wild stocks of humphead wrasse. Protecting the spawners would ensure that there would be enough recruits, prevent recruitment overfishing and enhance the wild stocks.