Reaching the poor through aquaculture: The case of technology adoption in rural communities at west central Philippines 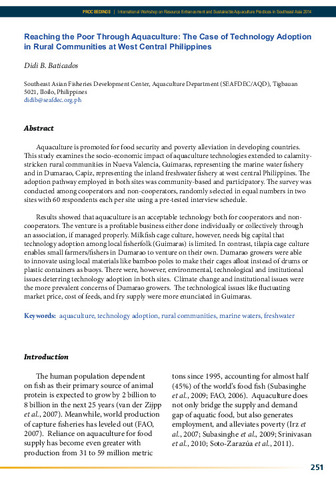 Aquaculture is promoted for food security and poverty alleviation in developing countries. This study examines the socio-economic impact of aquaculture technologies extended to calamitystricken rural communities in Nueva Valencia, Guimaras, representing the marine water fishery and in Dumarao, Capiz, representing the inland freshwater fishery at west central Philippines. The adoption pathway employed in both sites was community-based and participatory. The survey was conducted among cooperators and non-cooperators, randomly selected in equal numbers in two sites with 60 respondents each per site using a pre-tested interview schedule. Results showed that aquaculture is an acceptable technology both for cooperators and noncooperators. The venture is a profitable business either done individually or collectively through an association, if managed properly. Milkfish cage culture, however, needs big capital that technology adoption among local fisherfolk (Guimaras) is limited. In contrast, tilapia cage culture enables small farmers/fishers in Dumarao to venture on their own. Dumarao growers were able to innovate using local materials like bamboo poles to make their cages afloat instead of drums or plastic containers as buoys. There were, however, environmental, technological and institutional issues deterring technology adoption in both sites. Climate change and institutional issues were the more prevalent concerns of Dumarao growers. The technological issues like fluctuating market price, cost of feeds, and fry supply were more enunciated in Guimaras.