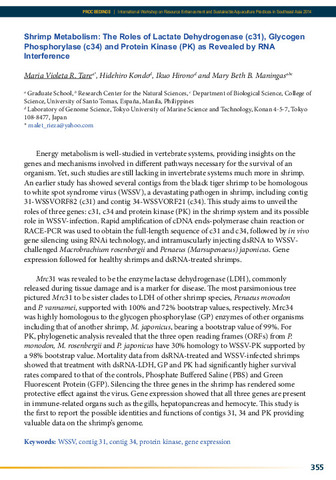 Energy metabolism is well-studied in vertebrate systems, providing insights on the genes and mechanisms involved in different pathways necessary for the survival of an organism. Yet, such studies are still lacking in invertebrate systems much more in shrimp. An earlier study has showed several contigs from the black tiger shrimp to be homologous to white spot syndrome virus (WSSV), a devastating pathogen in shrimp, including contig 31-WSSVORF82 (c31) and contig 34-WSSVORF21 (c34). This study aims to unveil the roles of three genes: c31, c34 and protein kinase (PK) in the shrimp system and its possible role in WSSV-infection. Rapid amplification of cDNA ends-polymerase chain reaction or RACE-PCR was used to obtain the full-length sequence of c31 and c34, followed by in vivo gene silencing using RNAi technology, and intramuscularly injecting dsRNA to WSSVchallenged Macrobrachium rosenbergii and Penaeus (Marsupenaeus) japonicus. Gene expression followed for healthy shrimps and dsRNA-treated shrimps. Mrc31 was revealed to be the enzyme lactase dehydrogenase (LDH), commonly released during tissue damage and is a marker for disease. The most parsimonious tree pictured Mrc31 to be sister clades to LDH of other shrimp species, Penaeus monodon and P. vannamei, supported with 100% and 72% bootstrap values, respectively. Mrc34 was highly homologous to the glycogen phosphorylase (GP) enzymes of other organisms including that of another shrimp, M. japonicus, bearing a bootstrap value of 99%. For PK, phylogenetic analysis revealed that the three open reading frames (ORFs) from P. monodon, M. rosenbergii and P. japonicus have 30% homology to WSSV-PK supported by a 98% bootstrap value. Mortality data from dsRNA-treated and WSSV-infected shrimps showed that treatment with dsRNA-LDH, GP and PK had significantly higher survival rates compared to that of the controls, Phosphate Buffered Saline (PBS) and Green Fluorescent Protein (GFP). Silencing the three genes in the shrimp has rendered some protective effect against the virus. Gene expression showed that all three genes are present in immune-related organs such as the gills, hepatopancreas and hemocyte. This study is the first to report the possible identities and functions of contigs 31, 34 and PK providing valuable data on the shrimp's genome.