Organization and development of stock enhancement in Japan 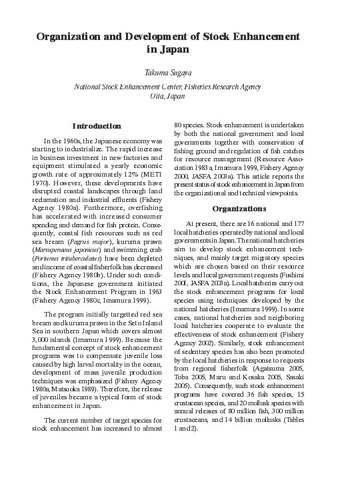 In the 1960s, the Japanese economy was starting to industrialize. The rapid increase in business investment in new factories and equipment stimulated a yearly economic growth rate of approximately 12% (METI 1970). However, these developments have disrupted coastal landscapes through land reclamation and industrial effluents (Fishery Agency 1980a). Furthermore, overfishing has accelerated with increased consumer spending and demand for fish protein. Consequently, coastal fish resources such as red sea bream (Pagrus major), kuruma prawn (Marsupenaeus japonicus) and swimming crab (Portunus trituberculatus) have been depleted and income of coastal fisherfolk has decreased (Fishery Agency, 1980). Under such conditions, the Japanese government initiated the Stock Enhancement Program in 1963 (Fishery Agency, 1980; Imamura, 1999). The program initially targeted red sea bream and kuruma prawn in the Seto Inland Sea in southern Japan which covers almost 3,000 islands (Imamura, 1999). Because the fundamental concept of stock enhancement programs was to compensate juvenile loss caused by high larval mortality in the ocean, development of mass juvenile production techniques was emphasized (Fishery Agency 1980a; Matsuoka, 1989). Therefore, the release of juveniles became a typical form of stock enhancement in Japan. The current number of target species for stock enhancement has increased to almost 80 species. Stock enhancement is undertaken by both the national government and local governments together with conservation of fishing ground and regulation of fish catches for resource management (Resource Association 1983a; Imamura 1999; Fishery Agency 2000; JASFA 2003a). This article reports the present status of stock enhancement in Japan from the organizational and technical viewpoints.