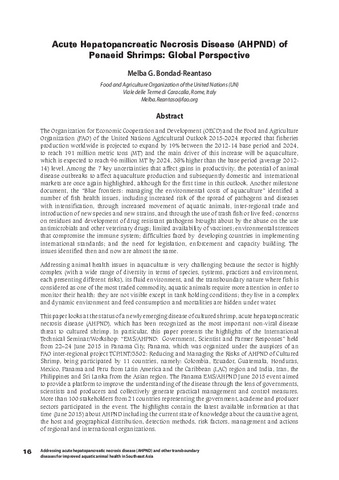 The Organization for Economic Cooperation and Development (OECD) and the Food and Agriculture Organization (FAO) of the United Nations Agricultural Outlook 2015-2024 reported that fisheries production worldwide is projected to expand by 19% between the 2012-14 base period and 2024, to reach 191 million metric tons (MT) and the main driver of this increase will be aquaculture, which is expected to reach 96 million MT by 2024, 38% higher than the base period (average 2012-14) level. Among the 7 key uncertainties that affect gains in productivity, the potential of animal disease outbreaks to affect aquaculture production and subsequently domestic and international markets are once again highlighted, although for the first time in this outlook. Another milestone document, the Blue frontiers: managing the environmental costs of aquaculture identified a number of fish health issues, including increased risk of the spread of pathogens and diseases with intensification, through increased movement of aquatic animals, inter-regional trade and introduction of new species and new strains, and through the use of trash fish or live feed; concerns on residues and development of drug resistant pathogens brought about by the abuse on the use antimicrobials and other veterinary drugs; limited availability of vaccines; environmental stressors that compromise the immune system; difficulties faced by developing countries in implementing international standards; and the need for legislation, enforcement and capacity building. The issues identified then and now are almost the same. Addressing animal health issues in aquaculture is very challenging because the sector is highly complex (with a wide range of diversity in terms of species, systems, practices and environment, each presenting different risks), its fluid environment, and the transboundary nature where fish is considered as one of the most traded commodity, aquatic animals require more attention in order to monitor their health: they are not visible except in tank holding conditions; they live in a complex and dynamic environment and feed consumption and mortalities are hidden under water. This paper looks at the status of a newly emerging disease of cultured shrimp, acute hepatopancreatic necrosis disease (AHPND), which has been recognized as the most important non-viral disease threat to cultured shrimp. In particular, this paper presents the highlights of the International Technical Seminar/Workshop: EMS/AHPND: Government, Scientist and Farmer Responses held from 22-24 June 2015 in Panama City, Panama, which was organized under the auspices of an FAO inter-regional project TCP/INT/3502: Reducing and Managing the Risks of AHPND of Cultured Shrimp, being participated by 11 countries, namely: Colombia, Ecuador, Guatemala, Honduras, Mexico, Panama and Peru from Latin America and the Caribbean (LAC) region and India, Iran, the Philippines and Sri Lanka from the Asian region. The Panama EMS/AHPND June 2015 event aimed to provide a platform to improve the understanding of the disease through the lens of governments, scientists and producers and collectively generate practical management and control measures. More than 100 stakeholders from 21 countries representing the government, academe and producer sectors participated in the event. The highlights contain the latest available information at that time (June 2015) about AHPND including the current state of knowledge about the causative agent, the host and geographical distribution, detection methods, risk factors, management and actions of regional and international organizations.