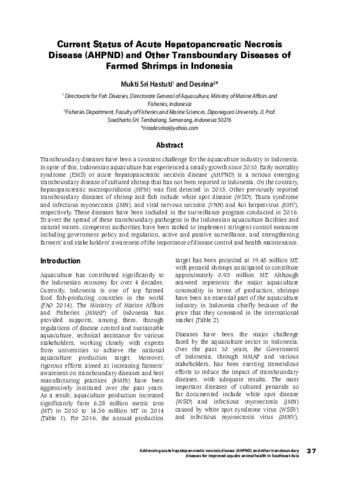 Transboundary diseases have been a constant challenge for the aquaculture industry in Indonesia. In spite of this, Indonesian aquaculture has experienced a steady growth since 2010. Early mortality syndrome (EMS) or acute hepatopancreatic necrosis disease (AHPND) is a serious emerging transboundary disease of cultured shrimp that has not been reported in Indonesia. On the contrary, hepatopancreatic microsporidiosis (HPM) was first detected in 2015. Other previously reported transboundary diseases of shrimp and fish include white spot disease (WSD), Taura syndrome and infectious myonecrosis (IMN), and viral nervous necrosis (VNN) and koi herpesvirus (KHV), respectively. These diseases have been included in the surveillance program conducted in 2016. To avert the spread of these transboundary pathogens in the Indonesian aquaculture facilities and natural waters, competent authorities have been tasked to implement stringent control measures including government policy and regulation, active and passive surveillance, and strengthening farmers and stake holders awareness of the importance of disease control and health maintenance.