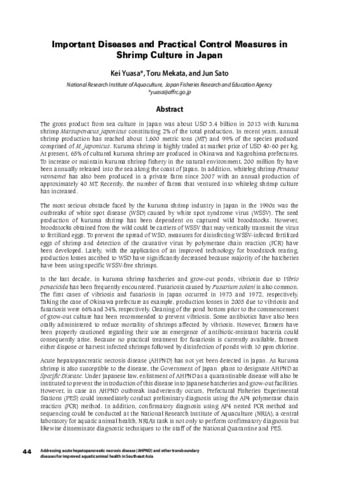 The gross product from sea culture in Japan was about USD 3.4 billion in 2013 with kuruma shrimp Marsupenaeus japonicus constituting 2% of the total production. In recent years, annual shrimp production has reached about 1,600 metric tons (MT) and 99% of the species produced comprised of M. japonicus. Kuruma shrimp is highly traded at market price of USD 40-60 per kg. At present, 65% of cultured kuruma shrimp are produced in Okinawa and Kagoshima prefectures. To increase or maintain kuruma shrimp fishery in the natural environment, 200 million fry have been annually released into the sea along the coast of Japan. In addition, whiteleg shrimp Penaeus vannamei has also been produced in a private farm since 2007 with an annual production of approximately 40 MT. Recently, the number of farms that ventured into whiteleg shrimp culture has increased. The most serious obstacle faced by the kuruma shrimp industry in Japan in the 1990s was the outbreaks of white spot disease (WSD) caused by white spot syndrome virus (WSSV). The seed production of kuruma shrimp has been dependent on captured wild broodstocks. However, broodstocks obtained from the wild could be carriers of WSSV that may vertically transmit the virus to fertilized eggs. To prevent the spread of WSD, measures for disinfecting WSSV-infected fertilized eggs of shrimp and detection of the causative virus by polymerase chain reaction (PCR) have been developed. Lately, with the application of an improved technology for broodstock rearing, production losses ascribed to WSD have significantly decreased because majority of the hatcheries have been using specific WSSV-free shrimps. In the last decade, in kuruma shrimp hatcheries and grow-out ponds, vibriosis due to Vibrio penaeicida has been frequently encountered. Fusariosis caused by Fusarium solani is also common. The first cases of vibriosis and fusariosis in Japan occurred in 1973 and 1972, respectively. Taking the case of Okinawa prefecture as example, production losses in 2005 due to vibriosis and fusariosis were 66% and 34%, respectively. Cleaning of the pond bottom prior to the commencement of grow-out culture has been recommended to prevent vibriosis. Some antibiotics have also been orally administered to reduce mortality of shrimps affected by vibriosis. However, farmers have been properly cautioned regarding their use as emergence of antibiotic-resistant bacteria could consequently arise. Because no practical treatment for fusariosis is currently available, farmers either dispose or harvest infected shrimps followed by disinfection of ponds with 10 ppm chlorine. Acute hepatopancreatic necrosis disease (AHPND) has not yet been detected in Japan. As kuruma shrimp is also susceptible to the disease, the Government of Japan plans to designate AHPND as Specific Disease. Under Japanese law, enlistment of AHPND as a quarantinable disease will also be instituted to prevent the introduction of this disease into Japanese hatcheries and grow-out facilities. However, in case an AHPND outbreak inadvertently occurs, Prefectural Fisheries Experimental Stations (PES) could immediately conduct preliminary diagnosis using the AP4 polymerase chain reaction (PCR) method. In addition, confirmatory diagnosis using AP4 nested PCR method and sequencing could be conducted at the National Research Institute of Aquaculture (NRIA), a central laboratory for aquatic animal health. NRIA s task is not only to perform confirmatory diagnosis but likewise disseminate diagnostic techniques to the staff of the National Quarantine and PES.