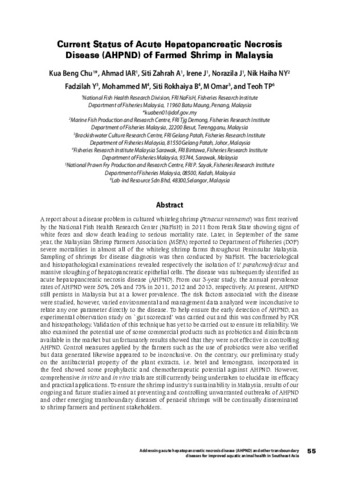 A report about a disease problem in cultured whiteleg shrimp (Penaeus vannamei) was first received by the National Fish Health Research Center (NaFisH) in 2011 from Perak State showing signs of white feces and slow death leading to serious mortality rate. Later, in September of the same year, the Malaysian Shrimp Farmers Association (MSFA) reported to Department of Fisheries (DOF) severe mortalities in almost all of the whiteleg shrimp farms throughout Peninsular Malaysia. Sampling of shrimps for disease diagnosis was then conducted by NaFisH. The bacteriological and histopathological examinations revealed respectively the isolation of V. parahemolyticus and massive sloughing of hepatopancreatic epithelial cells. The disease was subsequently identified as acute hepatopancreatic necrosis disease (AHPND). From our 3-year study, the annual prevalence rates of AHPND were 50%, 26% and 73% in 2011, 2012 and 2013, respectively. At present, AHPND still persists in Malaysia but at a lower prevalence. The risk factors associated with the disease were studied, however, varied environmental and management data analyzed were inconclusive to relate any one parameter directly to the disease. To help ensure the early detection of AHPND, an experimental observation study on `gut scorecard was carried out and this was confirmed by PCR and histopathology. Validation of this technique has yet to be carried out to ensure its reliability. We also examined the potential use of some commercial products such as probiotics and disinfectants available in the market but unfortunately results showed that they were not effective in controlling AHPND. Control measures applied by the farmers such as the use of probiotics were also verified but data generated likewise appeared to be inconclusive. On the contrary, our preliminary study on the antibacterial property of the plant extracts, i.e. betel and lemongrass, incorporated in the feed showed some prophylactic and chemotherapeutic potential against AHPND. However, comprehensive in vitro and in vivo trials are still currently being undertaken to elucidate its efficacy and practical applications. To ensure the shrimp industry s sustainability in Malaysia, results of our ongoing and future studies aimed at preventing and controlling unwarranted outbreaks of AHPND and other emerging transboundary diseases of penaeid shrimps will be continually disseminated to shrimp farmers and pertinent stakeholders.