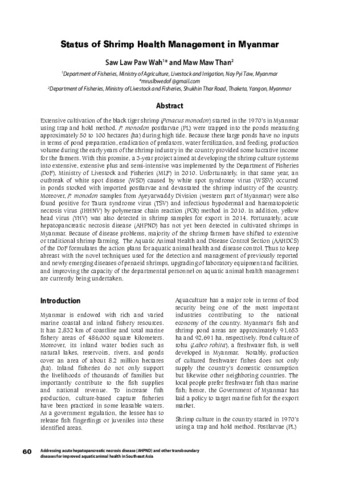 Extensive cultivation of the black tiger shrimp (Penaeus monodon) started in the 1970 s in Myanmar using trap and hold method. P. monodon postlarvae (PL) were trapped into the ponds measuring approximately 50 to 100 hectares (ha) during high tide. Because these large ponds have no inputs in terms of pond preparation, eradication of predators, water fertilization, and feeding, production volume during the early years of the shrimp industry in the country provided some lucrative income for the farmers. With this promise, a 3-year project aimed at developing the shrimp culture systems into extensive, extensive plus and semi-intensive was implemented by the Department of Fisheries (DoF), Ministry of Livestock and Fisheries (MLF) in 2010. Unfortunately, in that same year, an outbreak of white spot disease (WSD) caused by white spot syndrome virus (WSSV) occurred in ponds stocked with imported postlarvae and devastated the shrimp industry of the country. Moreover, P. monodon samples from Ayeyarwaddy Division (western part of Myanmar) were also found positive for Taura syndrome virus (TSV) and infectious hypodermal and haematopoietic necrosis virus (IHHNV) by polymerase chain reaction (PCR) method in 2010. In addition, yellow head virus (YHV) was also detected in shrimp samples for export in 2014. Fortunately, acute hepatopancreatic necrosis disease (AHPND) has not yet been detected in cultivated shrimps in Myanmar. Because of disease problems, majority of the shrimp farmers have shifted to extensive or traditional shrimp farming. The Aquatic Animal Health and Disease Control Section (AAHDCS) of the DoF formulates the action plans for aquatic animal health and disease control. Thus to keep abreast with the novel techniques used for the detection and management of previously reported and newly emerging diseases of penaeid shrimps, upgrading of laboratory equipment and facilities, and improving the capacity of the departmental personnel on aquatic animal health management are currently being undertaken.