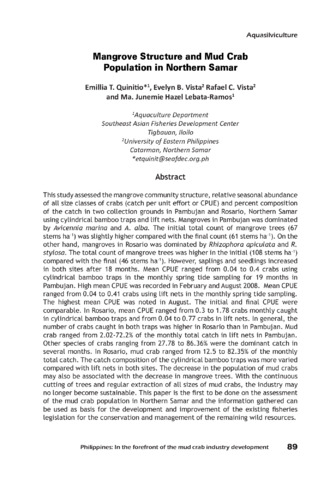 This study assessed the mangrove community structure, relative seasonal abundance of all size classes of crabs (catch per unit effort or CPUE) and percent composition of the catch in two collection grounds in Pambujan and Rosario, Northern Samar using cylindrical bamboo traps and lift nets. Mangroves in Pambujan was dominated by Avicennia marina and A. alba. The initial total count of mangrove trees (67 stems ha-1) was slightly higher compared with the final count (61 stems ha-1). On the other hand, mangroves in Rosario was dominated by Rhizophora apiculata and R. stylosa. The total count of mangrove trees was higher in the initial (108 stems ha-1) compared with the final (46 stems ha-1). However, saplings and seedlings increased in both sites after 18 months. Mean CPUE ranged from 0.04 to 0.4 crabs using cylindrical bamboo traps in the monthly spring tide sampling for 19 months in Pambujan. High mean CPUE was recorded in February and August 2008. Mean CPUE ranged from 0.04 to 0.41 crabs using lift nets in the monthly spring tide sampling. The highest mean CPUE was noted in August. The initial and final CPUE were comparable. In Rosario, mean CPUE ranged from 0.3 to 1.78 crabs monthly caught in cylindrical bamboo traps and from 0.04 to 0.77 crabs in lift nets. In general, the number of crabs caught in both traps was higher in Rosario than in Pambujan. Mud crab ranged from 2.02-72.2% of the monthly total catch in lift nets in Pambujan. Other species of crabs ranging from 27.78 to 86.36% were the dominant catch in several months. In Rosario, mud crab ranged from 12.5 to 82.35% of the monthly total catch. The catch composition of the cylindrical bamboo traps was more varied compared with lift nets in both sites. The decrease in the population of mud crabs may also be associated with the decrease in mangrove trees. With the continuous cutting of trees and regular extraction of all sizes of mud crabs, the industry may no longer become sustainable. This paper is the first to be done on the assessment of the mud crab population in Northern Samar and the information gathered can be used as basis for the development and improvement of the existing fisheries legislation for the conservation and management of the remaining wild resources.