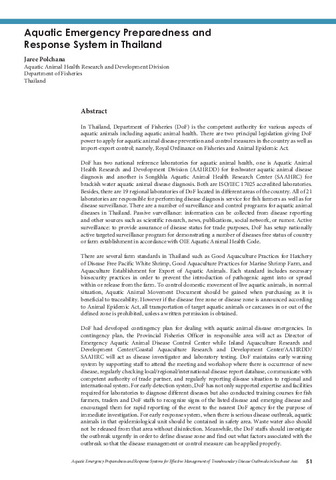 In Thailand, Department of Fisheries (DoF) is the competent authority for various aspects of aquatic animals including aquatic animal health. There are two principal legislation giving DoF power to apply for aquatic animal disease prevention and control measures in the country as well as import-export control; namely, Royal Ordinance on Fisheries and Animal Epidemic Act.DoF has two national reference laboratories for aquatic animal health, one is Aquatic Animal Health Research and Development Division (AAHRDD) for freshwater aquatic animal disease diagnosis and another is Songkhla Aquatic Animal Health Research Center (SAAHRC) for brackish water aquatic animal disease diagnosis. Both are ISO/IEC 17025 accredited laboratories. Besides, there are 19 regional laboratories of DoF located in different areas of the country. All of 21 laboratories are responsible for performing disease diagnosis service for fish farmers as well as for disease surveillance. There are a number of surveillance and control programs for aquatic animal diseases in Thailand. Passive surveillance: information can be collected from disease reporting and other sources such as scientific research, news, publications, social network, or rumor. Active surveillance: to provide assurance of disease status for trade purposes, DoF has setup nationally active targeted surveillance program for demonstrating a number of diseases free status of country or farm establishment in accordance with OIE Aquatic Animal Health Code.There are several farm standards in Thailand such as Good Aquaculture Practices for Hatchery of Disease Free Pacific White Shrimp, Good Aquaculture Practices for Marine Shrimp Farm, and Aquaculture Establishment for Export of Aquatic Animals. Each standard includes necessary biosecurity practices in order to prevent the introduction of pathogenic agent into or spread within or release from the farm. To control domestic movement of live aquatic animals, in normal situation, Aquatic Animal Movement Document should be gained when purchasing as it is beneficial to traceability. However if the disease free zone or disease zone is announced according to Animal Epidemic Act, all transportation of target aquatic animals or carcasses in or out of the defined zone is prohibited, unless a written permission is obtained.DoF had developed contingency plan for dealing with aquatic animal disease emergencies. In contingency plan, the Provincial Fisheries Officer in responsible area will act as Director of Emergency Aquatic Animal Disease Control Center while Inland Aquaculture Research and Development Center/Coastal Aquaculture Research and Development Center/AAHRDD/SAAHRC will act as disease investigator and laboratory testing. DoF maintains early warning system by supporting staff to attend the meeting and workshop where there is occurrence of new disease, regularly checking local/regional/international disease report database, communicate with competent authority of trade partner, and regularly reporting disease situation to regional and international system. For early detection system, DoF has not only supported expertise and facilities required for laboratories to diagnose different diseases but also conducted training courses for fish farmers, traders and DoF staffs to recognize signs of the listed disease and emerging disease and encouraged them for rapid reporting of the event to the nearest DoF agency for the purpose of immediate investigation. For early response system, when there is serious disease outbreak, aquatic animals in that epidemiological unit should be contained in safety area. Waste water also should not be released from that area without disinfection. Meanwhile, the DoF staffs should investigate the outbreak urgently in order to define disease zone and find out what factors associated with the outbreak so that the disease management or control measure can be applied properly.