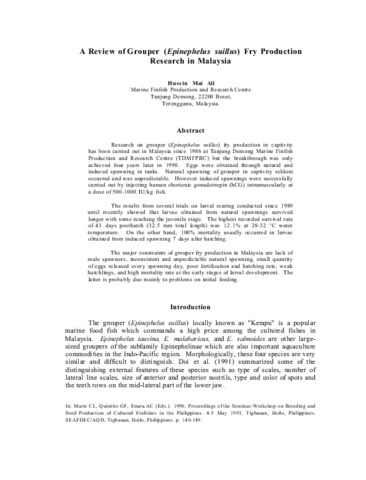 Research on grouper (Epinephelus suillus) fry production in captivity has been carried out in Malaysia since 1986 at Tanjung Demong Marine Finfish Production and Research Centre (TDMFPRC) but the breakthrough was only achieved four years later in 1990. Eggs were obtained through natural and induced spawning in tanks. Natural spawning of grouper in captivity seldom occurred and was unpredictable. However induced spawnings were successfully carried out by injecting human chorionic gonadotropin (hCG) intramuscularly at a dose of 500-1000 IU/kg fish. The results from several trials on larval rearing conducted since 1989 until recently showed that larvae obtained from natural spawnings survived longer with some reaching the juvenile stage. The highest recorded survival rate of 43 days posthatch (32.5 mm total length) was 12.1% at 28-32 °C water temperature. On the other hand, 100% mortality usually occurred in larvae obtained from induced spawning 7 days after hatching. The major constraints of grouper fry production in Malaysia are lack of male spawners, inconsistent and unpredictable natural spawning, small quantity of eggs released every spawning day, poor fertilization and hatching rate, weak hatchlings, and high mortality rate at the early stages of larval development. The latter is probably due mainly to problems on initial feeding.