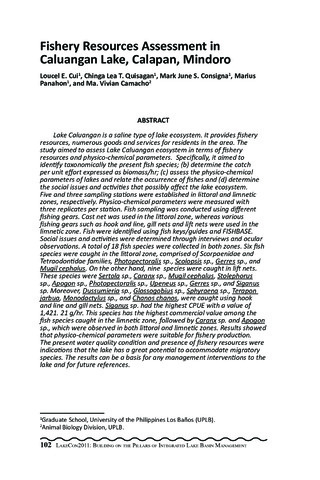 Lake Caluangan is a saline type of lake ecosystem. It provides fishery resources, numerous goods and services for residents in the area. The study aimed to assess Lake Caluangan ecosystem in terms of fishery resources and physico-chemical parameters. Specifically, it aimed to identify taxonomically the present fish species; (b) determine the catch per unit effort expressed as biomass/hr; (c) assess the physico-chemical parameters of lakes and relate the occurrence of fishes and (d) determine the social issues and activities that possibly affect the lake ecosystem. Five and three sampling stations were established in littoral and limnetic zones, respectively. Physico-chemical parameters were measured with three replicates per station. Fish sampling was conducted using different fishing gears. Cast net was used in the littoral zone, whereas various fishing gears such as hook and line, gill nets and lift nets were used in the limnetic zone. Fish were identified using fish keys/guides and FISHBASE. Social issues and activities were determined through interviews and ocular observations. A total of 18 fish species were collected in both zones. Six fish species were caught in the littoral zone, comprised of Scorpaenidae and Tetraodontidae families, Photopectoralis sp., Scolopsis sp., Gerres sp., and Mugil cephalus. On the other hand, nine species were caught in lift nets. These species were Sertola sp., Caranx sp., Mugil cephalus, Stolephorus sp., Apogon sp., Photopectoralis sp., Upeneus sp., Gerres sp., and Siganus sp. Moreover, Dussumieria sp., Glossogobius sp., Sphyraena sp., Terapon jarbua, Monodactylus sp., and Chanos chanos, were caught using hook and line and gill nets. Siganus sp. had the highest CPUE with a value of 1,421. 21 g/hr. This species has the highest commercial value among the fish species caught in the limnetic zone, followed by Caranx sp. and Apogon sp., which were observed in both littoral and limnetic zones. Results showed that physico-chemical parameters were suitable for fishery production. The present water quality condition and presence of fishery resources were indications that the lake has a great potential to accommodate migratory species. The results can be a basis for any management interventions to the lake and for future references.