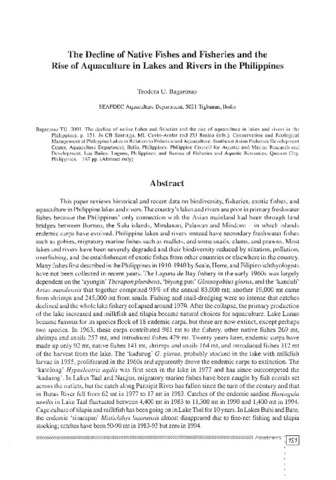 This paper reviews historical and recent data on biodiversity, fisheries, exotic fishes, and aquaculture in Philippine lakes and rivers. The country's lakes and rivers are poor in primary freshwater fishes because the Philippines' only connection with the Asian mainland had been through land bridges between Borneo, the Sulu islands, Mindanao, Palawan and Mindoro - in which islands endemic carps have evolved. Philippine lakes and rivers instead have secondary freshwater fishes such as gobies, migratory marine fishes such as mullets, and some snails, clams, and prawns. Most lakes and rivers have been severely degraded and their biodiversity reduced by siltation, pollution, overfishing, and the establishment of exotic fishes from other countries or elsewhere in the country. Many fishes first described in the Philippines in 1910-1940 by Seale, Herre, and Filipino ichthyologists have not been collected in recent years. The Laguna de Bay fishery in the early 1960s was largely dependent on the 'ayungin' Therapon plumbeus, 'biyang puti' Glossogobius giurus, and the 'kanduli' Arius manilensis that together comprised 95% of the annual 83,000 mt; another 19,000 mt came from shrimps and 245,000 mt from snails. Fishing and snail-dredging were so intense that catches declined and the whole lake fishery collapsed around 1970. After the collapse, the primary production of the lake increased and milkfish and tilapia became natural choices for aquaculture. Lake Lanao became famous for its species flock of 18 endemic carps, but these are now extinct, except perhaps two species. In 1963, these carps contributed 981 mt to the fishery, other native fishes 269 mt, shrimps and snails 257 mt, and introduced fishes 479 mt. Twenty years later, endemic carps have made up only 92 mt, native fishes 141 mt, shrimps and snails 164 mt, and introduced fishes 312 mt of the harvest from the lake. The 'kadurog' G. giurus, probably stocked in the lake with milkfish larvae in 1955, proliferated in the 1960s and apparently drove the endemic carps to extinction. The 'katolong' Hypseleotris agilis was first seen in the lake in 1977 and has since outcompeted the 'kadurog'. In Lakes Taal and Naujan, migratory marine fishes have been caught by fish corrals set across the outlets, but the catch along Pansipit River has fallen since the turn of the century and that in Butas River fell from 62 mt in 1977 to 17 mt in 1983. Catches of the endemic sardine Harengula tawilis in Lake Taal fluctuated between 4,400 mt in 1983 to 11,300 mt in 1990 and 1,400 mt in 1994. Cage culture of tilapia and milkfish has been going on in Lake Taal for 10 years. In Lakes Buhi and Bato, the endemic 'sinarapan' Mistichthys luzonensis almost disappeared due to fine-net fishing and tilapia stocking; catches have been 50-90 mt in 1983-93 but zero in 1994.