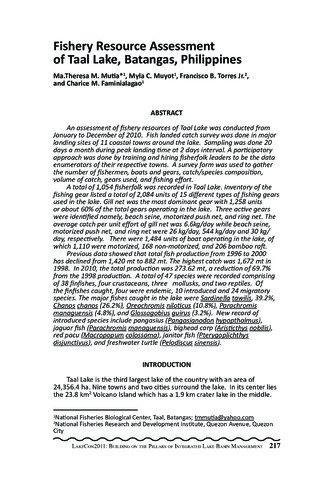 An assessment of fishery resources of Taal Lake was conducted from January to December of 2010. Fish landed catch survey was done in major landing sites of 11 coastal towns around the lake. Sampling was done 20 days a month during peak landing time at 2 days interval. A participatory approach was done by training and hiring fisherfolk leaders to be the data enumerators of their respective towns. A survey form was used to gather the number of fishermen, boats and gears, catch/species composition, volume of catch, gears used, and fishing effort. A total of 1,054 fisherfolk was recorded in Taal Lake. Inventory of the fishing gear listed a total of 2,084 units of 15 different types of fishing gears used in the lake. Gill net was the most dominant gear with 1,258 units or about 60% of the total gears operating in the lake. Three active gears were identified namely, beach seine, motorized push net, and ring net. The average catch per unit effort of gill net was 6.6kg/day while beach seine, motorized push net, and ring net were 26 kg/day, 544 kg/day and 30 kg/day, respectively. There were 1,484 units of boat operating in the lake, of which 1,110 were motorized, 168 non-motorized, and 206 bamboo raft. Previous data showed that total fish production from 1996 to 2000 has declined from 1,420 mt to 882 mt. The highest catch was 1,672 mt in 1998. In 2010, the total production was 273.62 mt, a reduction of 69.7% from the 1998 production. A total of 47 species were recorded comprising of 38 finfishes, four crustaceans, three mollusks, and two reptiles. Of the finfishes caught, four were endemic, 10 introduced and 24 migratory species. The major fishes caught in the lake were Sardinella tawilis, 39.2%, Chanos chanos (26.2%), Oreochromis niloticus (10.8%), Parachromis managuensis (4.8%), and Glossogobius guirus (3.2%). New record of introduced species include pangasius (Pangasianodon hypopthalmus), jaguar fish (Parachromis managuensis), bighead carp (Aristicthys nobilis), red pacu (Macropopum colossoma), janitor fish (Pterygoplichthys disjunctivus), and freshwater turtle (Pelodiscus sinensis).