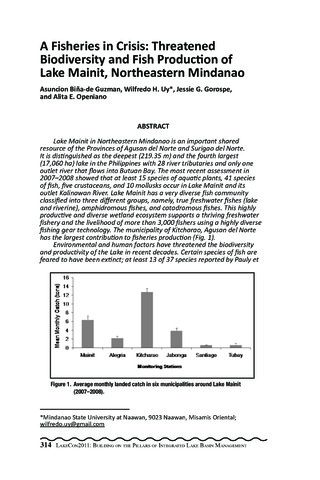 Lake Mainit in Northeastern Mindanao is an important shared resource of the Provinces of Agusan del Norte and Surigao del Norte. It is distinguished as the deepest (219.35 m) and the fourth largest (17,060 ha) lake in the Philippines with 28 river tributaries and only one outlet river that flows into Butuan Bay. The most recent assessment in 2007-2008 showed that at least 15 species of aquatic plants, 41 species of fish, five crustaceans, and 10 mollusks occur in Lake Mainit and its outlet Kalinawan River. Lake Mainit has a very diverse fish community classified into three different groups, namely, true freshwater fishes (lake and riverine), amphidromous fishes, and catadromous fishes. This highly productive and diverse wetland ecosystem supports a thriving freshwater fishery and the livelihood of more than 3,000 fishers using a highly diverse fishing gear technology. The municipality of Kitcharao, Agusan del Norte has the largest contribution to fisheries production (Fig. 1). Environmental and human factors have threatened the biodiversity and productivity of the Lake in recent decades. Certain species of fish are feared to have been extinct; at least 13 of 37 species reported by Pauly et al. (1990) were no longer encountered in the present study. More than 65% of the fish are migratory between the lake and Butuan Bay through the Kalinawan River. The population of the once abundant giant mottled eel (Anguilla marmorata) has drastically declined, resulting from massive fishing on adult eels during their seasonal spawning along Kalinawan River. The native white goby (Glossogobius giuris), locally known as pijanga, remains the most important fishery resource in Lake Mainit (Fig. 2), but the current fish catch is about 63% of the 1997-98 production as reported by Galicia and Lopez (2000). Many species are caught in progressively smaller sizes, resulting in lower economic value and hence, marginal fisher incomes. Pollution, unsustainable fishing practices, high fishing pressure, and lack of enforcement of fisheries policies have drastically reduced the annual fish catch from 15,108 t in 1980-81 to only about 831.50 t in 2007-08, which is only about 5.5% of the production level 26 years ago. Lake Mainit experiences the typical syndrome of a threatened fisheries resources: biodiversity loss, high fishing pressure, use of unsustainable fishing gears and methods, declining fish catch and catch-per-unit-effort, decreasing size of fish caught, and marginal or meager fisher incomes barely enough to provide for the basic daily needs like food, health, and children s education. The Lake Mainit Development Alliance (LMDA), an inter-LGU alliance among the eight municipalities around the lake, provides a ray of hope for this threatened resource. A fisheries management program is being integrated into the Lake Mainit Development Agenda to help restore Lake Mainit fisheries resources to sustainable levels.