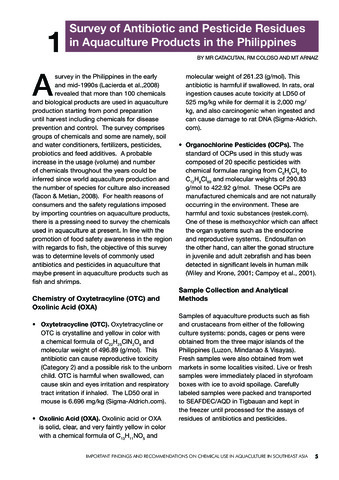 A survey in the Philippines in the early and mid-1990s (Lacierda et al.,2008) revealed that more than 100 chemicals and biological products are used in aquaculture production starting from pond preparation until harvest including chemicals for disease prevention and control. The survey comprises groups of chemicals and some are namely, soil and water conditioners, fertilizers, pesticides, probiotics and feed additives. A probable increase in the usage (volume) and number of chemicals throughout the years could be inferred since world aquaculture production and the number of species for culture also increased (Tacon & Metian, 2008). For health reasons of consumers and the safety regulations imposed by importing countries on aquaculture products, there is a pressing need to survey the chemicals used in aquaculture at present. In line with the promotion of food safety awareness in the region with regards to fish, the objective of this survey was to determine levels of commonly used antibiotics and pesticides in aquaculture that maybe present in aquaculture products such as fish and shrimps.