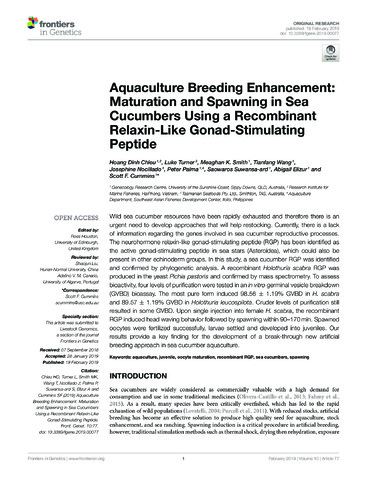 Wild sea cucumber resources have been rapidly exhausted and therefore there is an urgent need to develop approaches that will help restocking. Currently, there is a lack of information regarding the genes involved in sea cucumber reproductive processes. The neurohormone relaxin-like gonad-stimulating peptide (RGP) has been identified as the active gonad-stimulating peptide in sea stars (Asteroidea), which could also be present in other echinoderm groups. In this study, a sea cucumber RGP was identified and confirmed by phylogenetic analysis. A recombinant Holothuria scabra RGP was produced in the yeast Pichia pastoris and confirmed by mass spectrometry. To assess bioactivity, four levels of purification were tested in an in vitro germinal vesicle breakdown (GVBD) bioassay. The most pure form induced 98.56 ± 1.19% GVBD in H. scabra and 89.57 ± 1.19% GVBD in Holothuria leucospilota. Cruder levels of purification still resulted in some GVBD. Upon single injection into female H. scabra, the recombinant RGP induced head waving behavior followed by spawning within 90–170 min. Spawned oocytes were fertilized successfully, larvae settled and developed into juveniles. Our results provide a key finding for the development of a break-through new artificial breeding approach in sea cucumber aquaculture.

The Supplementary Material for this article can be found online at: https://www.frontiersin.org/articles/10.3389/fgene.2019.00077/full#supplementary-material

Except where otherwise noted, this item's license is described as http://creativecommons.org/licenses/by/4.0/