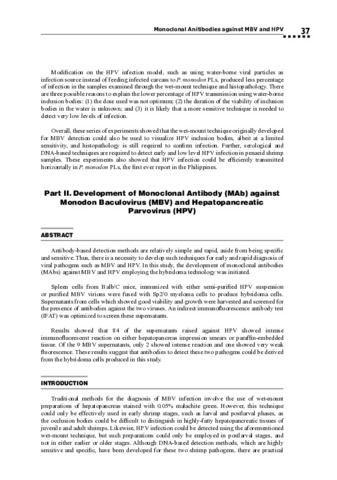 Antibody-based detection methods are relatively simple and rapid, aside from being specific and sensitive. Thus, there is a necessity to develop such techniques for early and rapid diagnosis of viral pathogens such as MBV and HPV. In this study, the development of monoclonal antibodies (MAbs) against MBV and HPV employing the hybridoma technology was initiated. Spleen cells from Balb/C mice, immunized with either semi-purified HPV suspension or purified MBV virions were fused with Sp2/0 myeloma cells to produce hybridoma cells. Supernatants from cells which showed good viability and growth were harvested and screened for the presence of antibodies against the two viruses. An indirect immunofluorescence antibody test (IFAT) was optimized to screen these supernatants. Results showed that 84 of the supernatants raised against HPV showed intense immunofluorescent reaction on either hepatopancreas impression smears or paraffin-embedded tissue. Of the 9 MBV supernatants, only 2 showed intense reaction and one showed very weak fluorescence. These results suggest that antibodies to detect these two pathogens could be derived from the hybridoma cells produced in this study.