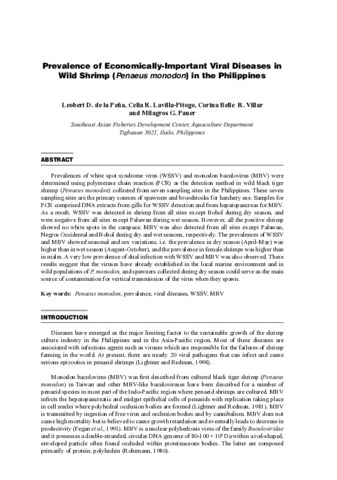 Prevalences of white spot syndrome virus (WSSV) and monodon baculovirus (MBV) were determined using polymerase chain reaction (PCR) as the detection method in wild black tiger shrimp (Penaeus monodon) collected from seven sampling sites in the Philippines. These seven sampling sites are the primary sources of spawners and broodstocks for hatchery use. Samples for PCR comprised DNA extracts from gills for WSSV detection and from hepatopancreas for MBV. As a result, WSSV was detected in shrimp from all sites except Bohol during dry season, and were negative from all sites except Palawan during wet season. However, all the positive shrimp showed no white spots in the carapace. MBV was also detected from all sites except Palawan, Negros Occidental and Bohol during dry and wet seasons, respectively. The prevalences of WSSV and MBV showed seasonal and sex variations, i.e. the prevalence in dry season (April-May) was higher than in wet season (August-October), and the prevalence in female shrimps was higher than in males. A very low prevalence of dual infection with WSSV and MBV was also observed. These results suggest that the viruses have already established in the local marine environment and in wild populations of P. monodon, and spawners collected during dry season could serve as the main source of contamination for vertical transmission of the virus when they spawn.