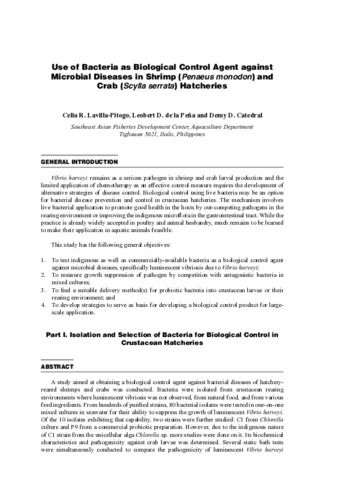 A study aimed at obtaining a biological control agent against bacterial diseases of hatchery-reared shrimps and crabs was conducted. Bacteria were isolated from crustacean rearing environments where luminescent vibriosis was not observed, from natural food, and from various feed ingredients. From hundreds of purified strains, 80 bacterial isolates were tested in one-on-one mixed cultures in seawater for their ability to suppress the growth of luminescent Vibrio harveyi. Of the 10 isolates exhibiting that capability, two strains were further studied: C1 from Chlorella culture and P9 from a commercial probiotic preparation. However, due to the indigenous nature of C1 strain from the unicellular alga Chlorella sp. more studies were done on it. Its biochemical characteristics and pathogenicity against crab larvae was determined. Several static bath tests were simultaneously conducted to compare the pathogenicity of luminescent Vibrio harveyi and the benign effect of potential probiotic bacteria on various stages of crab zoeae and shrimp postlarvae. Mortality in all treatments with probiotic bacteria was lower than those challenged with luminescent V. harveyi and the control indicating its benign effect. Initial bacterial inocula of 102 and 103 colony-forming-units (cfu)/mL in ultraviolet-sterilized seawater resulted in a hundred-fold increase in bacterial numbers after 24 hr, proving that in static bath bacterial bioassays, growth and replication of bacteria occurs in the test chambers. However, when the bacterial inocula were 105 to 106 cfu/mL, no significant change in bacterial numbers occurred. Furthermore, control chambers with no bacteria inoculated, were found to harbor between 104 to 105 cfu/mL of mixed bacterial population after 24 hr, part of which was luminescent Vibrio. Since the tests were conducted without feeding, results proved that bacteria associated with the test larvae also proliferated in significant numbers during the experimental period. Thus, monitoring of bacteria should not be done only on the initial hour of inoculation, but the following day as well to show microbial interactions during the experiment.