Use of bacteria as biological control agent against microbial diseases in shrimp (Penaeus monodon) and crab (Scylla serrata) hatcheries: Part III. Application of probiotics in culture water and surfaces 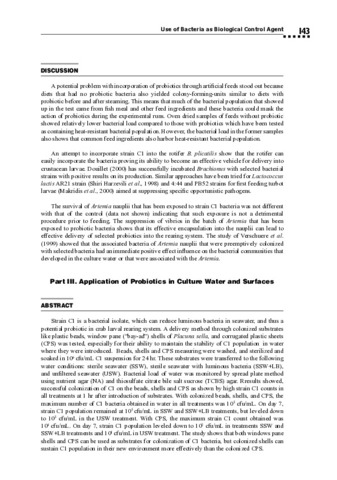 Strain C1 is a bacterial isolate, which can reduce luminous bacteria in seawater, and thus a potential probiotic in crab larval rearing system. A delivery method through colonized substrates like plastic beads, window pane (“bay-ad”) shells of Placuna sella, and corrugated plastic sheets (CPS) was tested, especially for their ability to maintain the stability of C1 population in water where they were introduced. Beads, shells and CPS measuring were washed, and sterilized and soaked in 106 cfu/mL C1 suspension for 24 hr. These substrates were transferred to the following water conditions: sterile seawater (SSW), sterile seawater with luminous bacteria (SSW+LB), and unfiltered seawater (USW). Bacterial load of water was monitored by spread plate method using nutrient agar (NA) and thiosulfate citrate bile salt sucrose (TCBS) agar. Results showed, successful colonization of C1 on the beads, shells and CPS as shown by high strain C1 counts in all treatments at 1 hr after introduction of substrates. With colonized beads, shells, and CPS, the maximum number of C1 bacteria obtained in water in all treatments was 105 cfu/mL. On day 7, strain C1 population remained at 105 cfu/mL in SSW and SSW+LB treatments, but leveled down to 103 cfu/mL in the USW treatment. With CPS, the maximum strain C1 count obtained was 104 cfu/mL. On day 7, strain C1 population leveled down to 102 cfu/mL in treatments SSW and SSW+LB treatments and 101 cfu/mL in USW treatment. The study shows that both windows pane shells and CPS can be used as substrates for colonization of C1 bacteria, but colonized shells can sustain C1 population in their new environment more effectively than the colonized CPS.