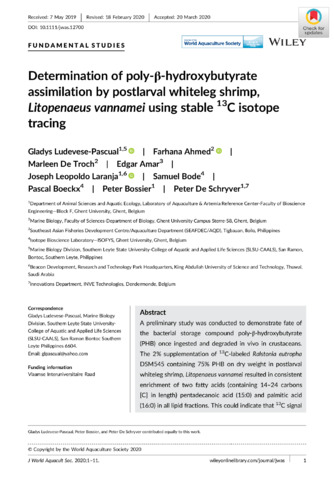 A preliminary study was conducted to demonstrate fate of the bacterial storage compound poly-β-hydroxybutyrate (PHB) once ingested and degraded in vivo in crustaceans. The 2% supplementation of 13C-labeled Ralstonia eutropha DSM545 containing 75% PHB on dry weight in postlarval whiteleg shrimp, Litopenaeus vannamei resulted in consistent enrichment of two fatty acids (containing 14–24 carbons [C] in length) pentadecanoic acid (15:0) and palmitic acid (16:0) in all lipid fractions. This could indicate that 13C signal may not only originate from the PHB but partly from the structural components of the bacterial cell. There was a trend of lower 13C enrichment in various lipid fractions of the postlarvae as compared to the diet. These findings may have important implications as to potential of PHB as energy source rather than as building block. There was a rapid transfer of 13C in the postlarvae as seen by the significant 13C enrichment in the tissues 4 hr after feeding with labeled bacterial cells. Overall, the assimilation of PHB in crustacean tissues is demonstrated for the first time. Our results indicate that PHB once ingested is rapidly assimilated in the tissues and could probably act as an energy source rather than as a building block.