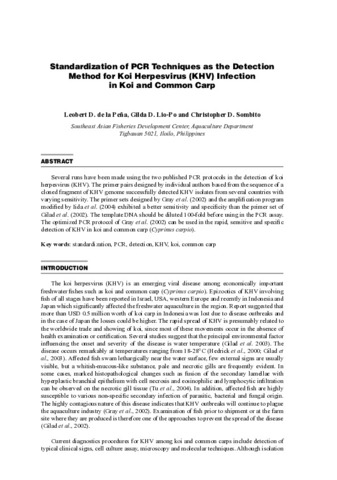 Several runs have been made using the two published PCR protocols in the detection of koi herpesvirus (KHV). The primer pairs designed by individual authors based from the sequence of a cloned fragment of KHV genome successfully detected KHV isolates from several countries with varying sensitivity. The primer sets designed by Gray et al. (2002) and the amplification program modified by Iida et al. (2004) exhibited a better sensitivity and specificity than the primer set of Gilad et al. (2002). The template DNA should be diluted 100-fold before using in the PCR assay. The optimized PCR protocol of Gray et al. (2002) can be used in the rapid, sensitive and specific detection of KHV in koi and common carp (Cyprinus carpio).