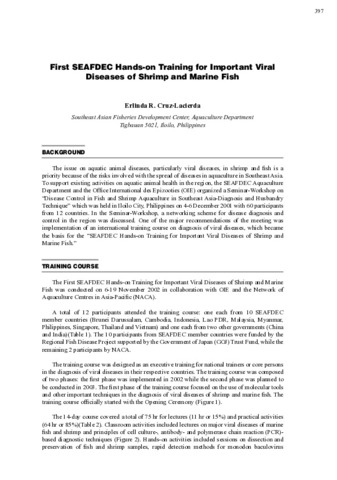 The issue on aquatic animal diseases, particularly viral diseases, in shrimp and fish is a priority because of the risks involved with the spread of diseases in aquaculture in Southeast Asia. To support existing activities on aquatic animal health in the region, the SEAFDEC Aquaculture Department and the Office International des Epizooties (OIE) organized a Seminar-Workshop on “Disease Control in Fish and Shrimp Aquaculture in Southeast Asia-Diagnosis and Husbandry Technique” which was held in Iloilo City, Philippines on 4-6 December 2001 with 60 participants from 12 countries. In the Seminar-Workshop, a networking scheme for disease diagnosis and control in the region was discussed. One of the major recommendations of the meeting was implementation of an international training course on diagnosis of viral diseases, which became the basis for the “SEAFDEC Hands-on Training for Important Viral Diseases of Shrimp and Marine Fish.”