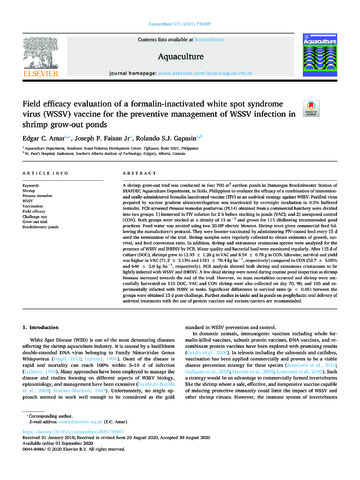 A shrimp grow-out trial was conducted in four 700 m2 earthen ponds in Dumangas Brackishwater Station of SEAFDEC Aquaculture Department, in Iloilo, Philippines to evaluate the efficacy of a combination of immersion- and orally-administered formalin inactivated vaccine (FIV) as an antiviral strategy against WSSV. Purified virus prepared by sucrose gradient ultracentrifugation was inactivated by overnight incubation in 0.5% buffered formalin. PCR-screened Penaeus monodon postlarvae (PL14) obtained from a commercial hatchery were divided into two groups: 1) immersed in FIV solution for 2 h before stocking in ponds (VAC); and 2) unexposed control (CON). Both groups were stocked at a density of 15 m−2 and grown for 115 d following recommended good practices. Pond water was aerated using two 20-HP electric blowers. Shrimp were given commercial feed following the manufacturer's protocol. They were booster-vaccinated by administering FIV-coated feed every 15 d until the termination of the trial. Shrimp samples were regularly collected to obtain estimates of growth, survival, and feed conversion ratio. In addition, shrimp and extraneous crustacean species were analyzed for the presence of WSSV and IHHNV by PCR. Water quality and bacterial load were monitored regularly. After 115 d of culture (DOC), shrimps grew to 12.93 ± 1.26 g in VAC and 8.54 ± 0.78 g in CON. Likewise, survival and yield was higher in VAC (71.2 ± 3.13% and 1311 ± 70.4 kg ha−1, respectively) compared to CON (52.7 ± 5.05% and 640 ± 3.0 kg ha−1, respectively). PCR analysis showed both shrimp and extraneous crustaceans to be lightly infected with WSSV and IHHNV. A few dead shrimp were noted during routine pond inspection as shrimp biomass increased towards the end of the trial. However, no mass mortalities occurred and shrimp were successfully harvested on 115 DOC. VAC and CON shrimp were also collected on day 70, 90, and 105 and experimentally infected with WSSV in tanks. Significant differences in survival rates (p < 0.05) between the groups were obtained 15 d post-challenge. Further studies in tanks and in ponds on prophylactic oral delivery of antiviral treatments with the use of protein vaccines and vectors/carriers are recommended.