The use of chemicals in aquaculture in Indonesia 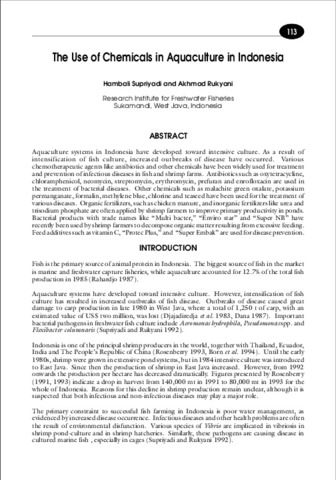 Aquaculture systems in Indonesia have developed toward intensive culture. As a result of intensification of fish culture, increased outbreaks of disease have occurred. Various chemotherapeutic agents like antibiotics and other chemicals have been widely used for treatment and prevention of infectious diseases in fish and shrimp farms. Antibiotics such as oxytetracycline, chloramphenicol, neomycin, streptomycin, erythromycin, prefuran and enrofloxacin are used in the treatment of bacterial diseases. Other chemicals such as malachite green oxalate, potassium permanganate, formalin, methylene blue, chlorine and teaseed have been used for the treatment of various diseases. Organic fertilizers, such as chicken manure, and inorganic fertilizers like urea and trisodium phosphate are often applied by shrimp farmers to improve primary productivity in ponds. Bacterial products with trade names like “Multi bacter,” “Enviro star” and “Super NB” have recently been used by shrimp farmers to decompose organic matter resulting from excessive feeding. Feed additives such as vitamin C, “Protec Plus,” and “Super Embak” are used for disease prevention.