Human health aspects of the use of chemicals in aquaculture, with special emphasis on food safety and regulations 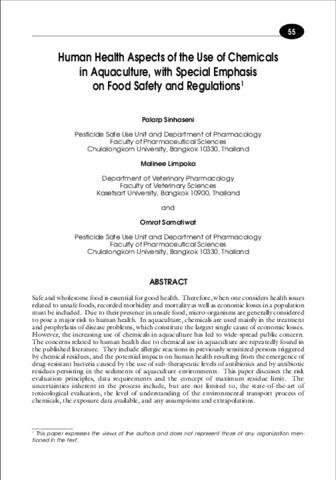 Safe and wholesome food is essential for good health. Therefore, when one considers health issues related to unsafe foods, recorded morbidity and mortality as well as economic losses in a population must be included. Due to their presence in unsafe food, micro-organisms are generally considered to pose a major risk to human health. In aquaculture, chemicals are used mainly in the treatment and prophylaxis of disease problems, which constitute the largest single cause of economic losses. However, the increasing use of chemicals in aquaculture has led to wide-spread public concern. The concerns related to human health due to chemical use in aquaculture are repeatedly found in the published literature. They include allergic reactions in previously sensitized persons triggered by chemical residues, and the potential impacts on human health resulting from the emergence of drug-resistant bacteria caused by the use of sub-therapeutic levels of antibiotics and by antibiotic residues persisting in the sediments of aquaculture environments. This paper discusses the risk evaluation principles, data requirements and the concept of maximum residue limit. The uncertainties inherent in the process include, but are not limited to, the state-of-the-art of toxicological evaluation, the level of understanding of the environmental transport process of chemicals, the exposure data available, and any assumptions and extrapolations.