Partnership for the sustainable development of Tadlak Lake, Laguna, Philippines 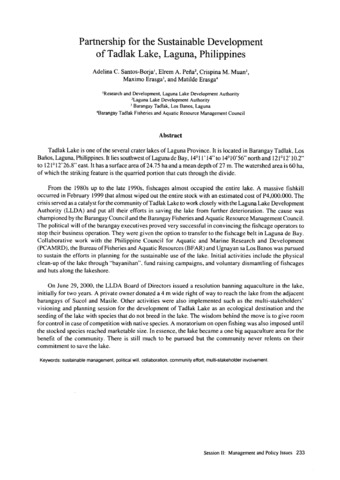 Tadlak Lake is one of the several crater lakes of Laguna Province. It is located in Barangay Tadlak, Los Banos, Laguna, Philippines. It lies southwest of Laguna de Bay, 14°11 14 to 14°10 56 north and 121° 12 10.2 to 121°12 26.8 east. It has a surface area of 24.75 ha and a mean depth of 27 m. The watershed area is 60 ha, of which the striking feature is the quarried portion that cuts through the divide. From the 1980s up to the late 1990s, fishcages almost occupied the entire lake. A massive fishkill occurred in February 1999 that almost wiped out the entire stock with an estimated cost of P4,000.000. The crisis served as a catalyst for the community of Tadlak Lake to work closely with the Laguna Lake Development Authority (LLDA) and put all their efforts in saving the lake from further deterioration. The cause was championed by the Barangay Council and the Barangay Fisheries and Aquatic Resource Management Council. The political will of the barangay executives proved very successful in convincing the fishcage operators to stop their business operation. They were given the option to transfer to the fishcage belt in Laguna de Bay. Collaborative work with the Philippine Council for Aquatic and Marine Research and Development (PCAMRD), the Bureau of Fisheries and Aquatic Resources (BFAR) and Ugnayan sa Los Banos was pursued to sustain the efforts in planning for the sustainable use of the lake. Initial activities include the physical clean-up of the lake through bayanihan , fund raising campaigns, and voluntary dismantling of fishcages and huts along the lakeshore. On June 29, 2000, the LLDA Board of Directors issued a resolution banning aquaculture in the lake, initially for two years. A private owner donated a 4 m wide right of way to reach the lake from the adjacent barangays of Sucol and Masile. Other activities were also implemented such as the multi-stakeholders visioning and planning session for the development of Tadlak Lake as an ecological destination and the seeding of the lake with species that do not breed in the lake. The wisdom behind the move is to give room for control in case of competition with native species. A moratorium on open fishing was also imposed until the stocked species reached marketable size. In essence, the lake became a one big aquaculture area for the benefit of the community. There is still much to be pursued but the community never relents on their commitment to save the lake.