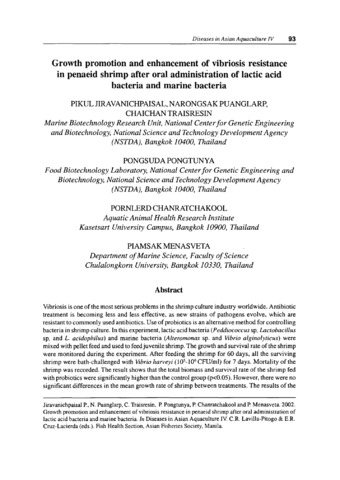 Vibriosis is one of the most serious problems in the shrimp culture industry worldwide. Antibiotic treatment is becoming less and less effective, as new strains of pathogens evolve, which are resistant to commonly used antibiotics. Use of probiotics is an alternative method for controlling bacteria in shrimp culture. In this experiment, lactic acid bacteria (Peddiococcus sp, Lactobacillus sp, and L. acidophilus) and marine bacteria (Alteromonas sp. and Vibrio alginolyticus) were mixed with pellet feed and used to feed juvenile shrimp. The growth and survival rate of the shrimp were monitored during the experiment. After feeding the shrimp for 60 days, all the surviving shrimp were bath-challenged with Vibrio harveyi (105-106 CFU/ml) for 7 days. Mortality of the shrimp was recorded. The result shows that the total biomass and survival rate of the shrimp fed with probiotics were significantly higher than the control group (p<0.05). However, there were no significant differences in the mean growth rate of shrimp between treatments. The results of the challenge test shows that the groups fed with lactic acid bacteria had the highest survival rates (Peddiococcus sp., 86.4%; Lactobacillus sp., 90.5% and L. acidophilus, 93.8%), followed by the treatments fed with marine bacteria (Alteromonas sp, 74.6% and Vibrio alginolyticus, 61.8%) and the control treatment had the lowest survival rate (59%).