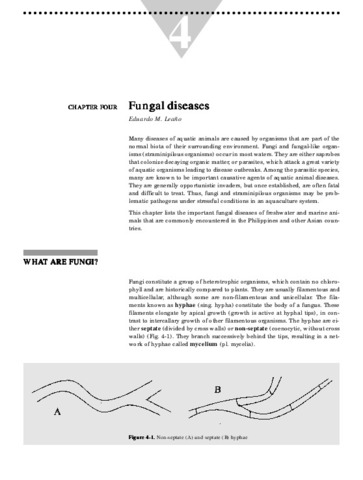 Over the past 20 years, aquatic animal mycopathogens have become the focus of considerable research. The many known occurrences of fungal diseases in wild populations and the documented devastating disease outbreaks indicate that fungal and fungal-like pathogens are important in nature. Fungal diseases can act as major limitations on natural and cultured populations of aquatic animals. However, knowledge on fungal diseases is rudimentary consisting primarily of the identification and pathology of etiological agents. Detection of fungal infections relies only on the observation of gross pathology, histological examinations, and standard mycological isolation and identification procedures. As a result, there are some cases where the implicated fungal pathogen cannot be demonstrated as the primary cause of a particular disease. In such cases, the fungal pathogen is usually regarded as secondary invader. Continued research in basic mycology is still an essential resource for fish pathologists in diagnosing diseases caused by fungi. Although fungi reportedly affect very few species, fungal diseases, if not properly controlled or prevented, can still pose a threat to the aquaculture industry.